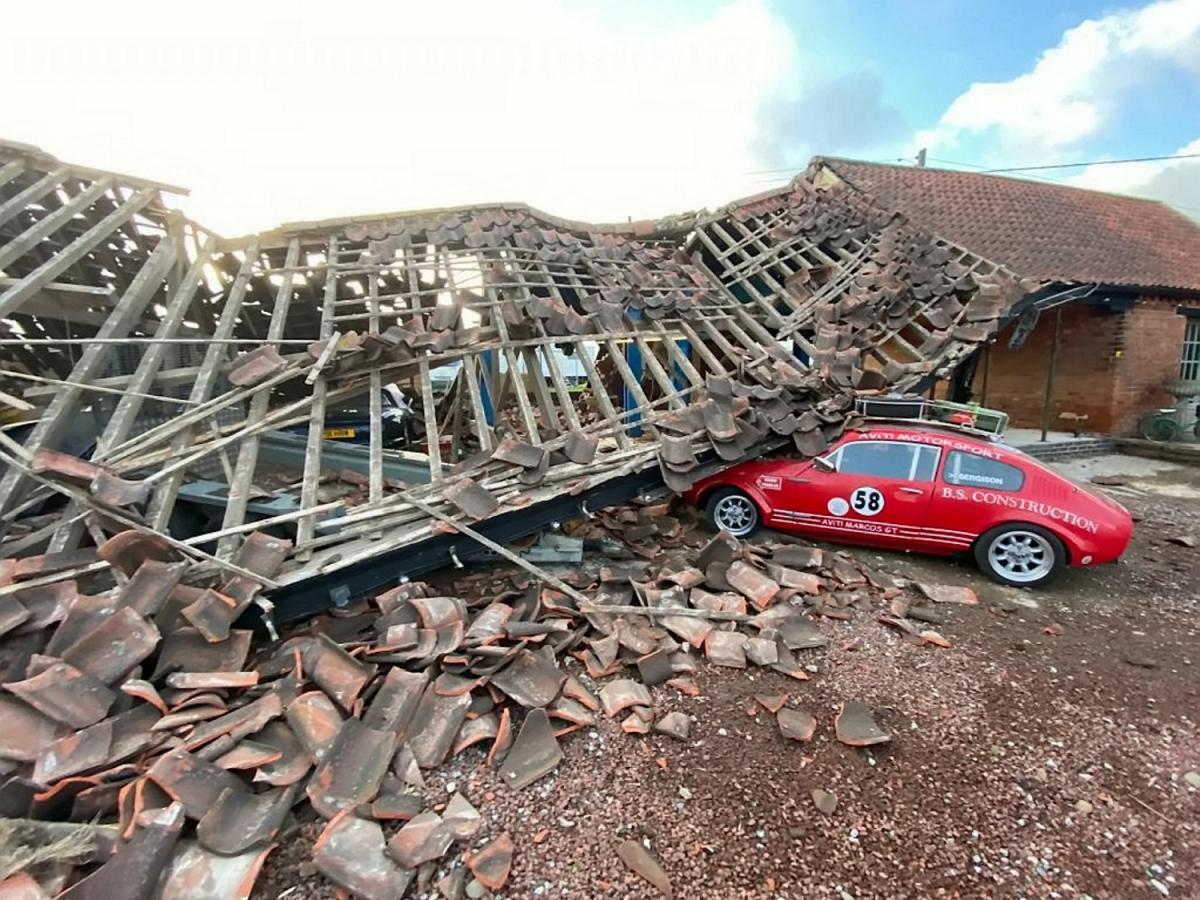 A devastated classic car fan after a collection worth £445,000 was damaged in storms

A classic car fan has been left devastated after his nearly £500,000 collection was crushed by weekend storms.

Ewen Sergison, 46, had to count the cost after his precious vehicles were destroyed by 100mph winds as storms Eunice and Franklin battered Britain.

The F1 racing engineer, who also works as a high-speed driving instructor, said the damage to his racing car collection would amount to hundreds of thousands of pounds.

Despite the extensive damage, Sergison, who runs AVIT Motorsport, says he’s just glad no customers or staff were inside the structure when it fell during the storm.

Sergison, who lives in Darlton, Nottinghamshire, with his fiancee Rachel, 30, said: “We had only been home about half an hour when we noticed the wind picking up.

“A tile suddenly crossed the yard, so we thought we should move the cars, but when we got up to move them, the whole yard was filled with dust.

“The roof and walls of the building just collapsed. It was a relief to find no one was inside.

“My partner was hysterical, I spent a good minute telling her to calm down.

“Fortunately everyone was safe. None of my staff, customers or animals were there, it was mostly my own damaged cars and not customers.

“If anything, I’m glad it wasn’t the customers – as one was the £350,000 aluminium-bodied Alfa Romeo GTA and the other was the Triumph Stag.

“But the total cost is still likely to be in the hundreds of thousands of pounds, so it’s quite devastating to say the least.

“We moved in just over a year ago, the house has not suffered any damage. One side is where all the prep work is taking place, the side that has collapsed is an open fronted barn where we kept the cars.

“The wind blew over the back wall and roof and blew it about 20ft (6m) into the yard.

“The shovel and the dumper are the ones we use on site, the Aston Martin was a retirement gift.

“The 1968 Mini Marcos was given to me by my late mother when I was 14, so these cars obviously have sentimental value as well.

“But we also got away with it a lot when you think about it. The valuable customer cars just had some windshield damage and dents to the hoods and roof.

“In the long term we were going to have 11 cars, five ramps and a glass front, so that’s a good job, it happened now instead of later because it could have been worse.”

Sergison and his partner had previously endured a terrifying flight from New York to the UK, landing at Heathrow Airport in high winds.

He added: “We had a bad landing at Heathrow, I drive F1 cars for a living but this is the scariest thing I’ve ever had.

“We saw our flight featured on YouTube. It was a bit surreal to see it when we recognized it.

“And then it happened within half an hour of us getting home. Everyone was brilliant in supporting us.

“People were helping out and bringing in food. I’m not sure of the exact costs yet and I’m not looking forward to finding out.”