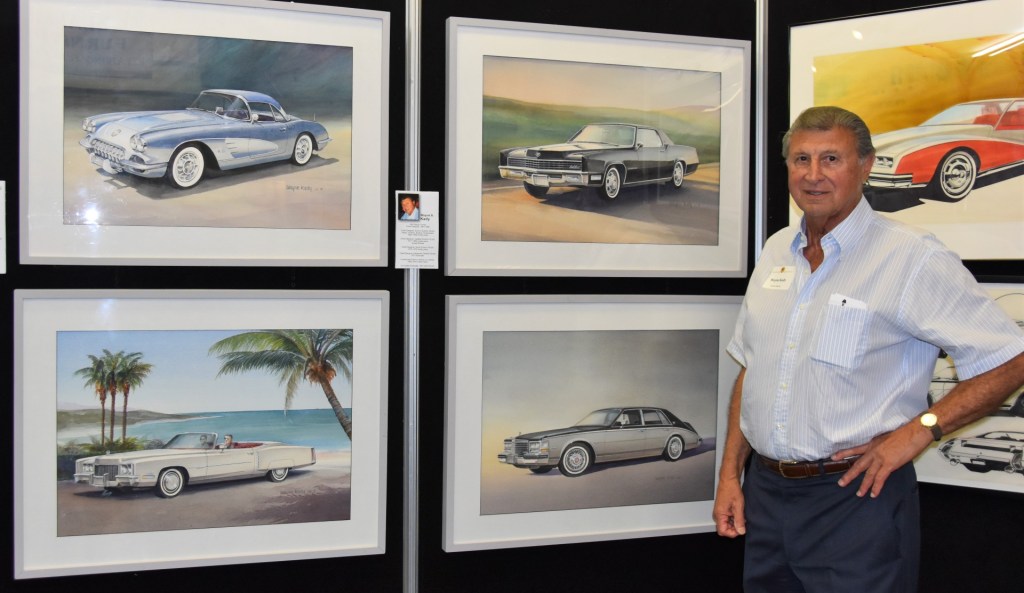 All of the mid-century classic cars seen on the Woodward Dream Cruise started out as a drawing on paper by an automotive designer.

“We used hand-drawn sketches,” said Wayne Kady, 84, of Royal Oak, former chief designer for GM’s Cadillac division. “We could throw them and maybe do 100 in one day. Automotive art is a vehicle to show your idea… You had to be an artist.

Kady saw automotive design move from drawings to computers during his time as a designer from 1961 to 1999.

He and other designers from the League of Retired Automotive Designers feature pieces of concept automotive art they made during Detroit’s golden age of automotive design, as well as more recent works.

Their work is part of the Automotive Concept Art exhibit that opens next month at the Royal Oak Historical Society Museum, 1411 W. Webster Rd.

Kady and other designers from the early age of automotive design will be at an opening reception kicking off the exhibit from 7-9 p.m. on August 5.

Museum curator Muriel Versagi said the reception was a chance for people to meet the designers behind some of Detroit’s most iconic automobiles.

The exhibition will continue at the museum after the reception until September 10.

“Wayne Kady helped put together the exhibit,” Versagi said. “His work is part of the exhibition and he is quite an artist.”

The annual automotive art exhibition at the historic museum was launched in 2015 by Robert Edwards, a Royal Oak artist who died in 2018. Edwards was at the forefront of a successful movement to gain recognition for the works of automotive designer art as legitimate art at the Detroit Institute. Arts.

“Robert Edwards was so amazing and full of energy,” Versace said. “He was really behind this annual exhibit at the historical museum.”

The museum is also hosting its 10th annual classic car exhibit featuring dozens of vehicles from 10 a.m. to 3 p.m., Saturday, August 6. All donations go to fund the non-profit historical museum.

Among the dozens of designs in the upcoming exhibit are works by designers from GM, Ford, Chrysler and even Studebaker, Kady said.

Some of the designers are contributing their own new artwork, showing concept drawings of how they would envision an updated Dodge Viper. The sports car was last manufactured in 2017.

Drawings from car designers were a key part of the teamwork it took to create a new car and get it into production, Kady said.

“We used to say exterior styling takes you to the (dealer’s) showroom and then the interior sells the car,” he said.

What’s unique about the designers’ art exhibit is that it features accurately rendered concept drawings of cars that were never produced, but nonetheless captured the spirit of how the Mid-century designers imagined the future.

From the 1970s, cars became smaller under the pressure of the energy crisis of the time caused by an oil embargo by oil-producing countries.

When Kady started as a designer in 1961, cars were longer, lower and wider. That changed in the 70s.

“Cars as I knew them were going away,” he said. “SUVs, pickups and small cars have taken over.”

Many retired automotive designers still live in and around Royal Oak. The colorful concept drawings they saved from the cars they designed during the classic car era are what remains of their work.

“Hopefully we’ll have a great turnout ‘for the exhibit,'” Kady said. “I think it’s a treasure for this area and a chance to see something that doesn’t really exist anymore.”