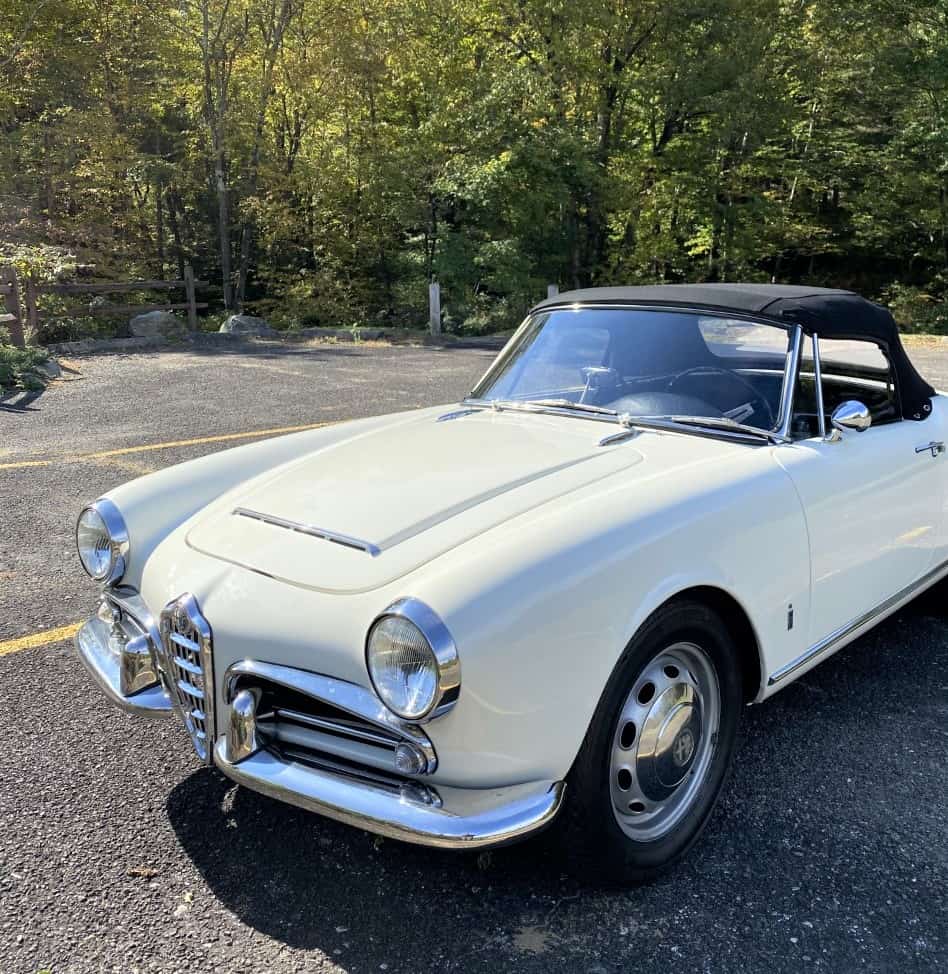 Sharing the joy with the grandchildren

I have owned my beloved 1965 Alfa Giulia Spider Veloce for 16 unforgettable years. At the end of 2015, in a moment of madness, I caught the bug of a modern sports car. I bought a Boxster S and sold the Alfa to a friend of mine in California on the condition that I could buy the car back if I had seller’s remorse… which I experienced shortly after I returned the keys. So I contacted the dealer and picked up my Alfa.

Earlier this year, legendary automotive restorer Wayne Carini performed a meticulous overhaul of the car. He’s now back in my driveway and won’t be leaving anytime soon, except when I take him on a city cruise or drive him in a rally.

I recently posted a short story about restoring my Alfa Romeo 65 on social media. I explained some of the reasons I love driving a 55 year old car that lacks all modern conveniences including a radio. It’s just me and the machine, with all the sights, sounds, smells and sensations of sitting 12 inches above the road at 60 miles per hour, plus the adventure of a breakdown imminent which is an inherent characteristic of every classic car.

To my surprise, several people on my social network immediately responded with their own car stories. The central theme of these responses was how the fundamental joys of driving, involving human connection with a complex machine, are quickly suppressed.

For car enthusiasts who really love to drive, our relationship with cars and trucks has fundamentally changed over the past few years. Thanks to technology, buzzers now sound when we leave lanes or another car passes us. The main beam headlights turn on and off automatically. Panoramic cameras display our surroundings. The GPS tells us when to turn and if there are upcoming traffic delays. The brakes are applied before we see any danger. Parallel parking is provided without touching the steering wheel. EZ-Pass systems take the fun of throwing coins into the toll plaza basket.

Is it any wonder why texting while driving has become such a problem when there is so little for drivers to do in modern cars? As we move closer to fully autonomous vehicles, it is worth considering what we are giving up by becoming passengers behind the wheel.

Driving has played an important role in the lives of most Americans over the past 100 years. The importance of cars and trucks goes far beyond their ability to take us from point A to point B.

By the age of 3, I could identify the make and model of almost any car on the road. In high school, I spent most of my free time and money trying to restore a 1966 Plymouth Barracuda fastback, largely to impress my friends and young girls. As an adult I took my Alfa Romeo on weeklong road rallies for the holidays, as well as countless trips on local roads, just to clear my head. I have also owned over 50 different daily drivers because, like so many other serious car enthusiasts, I am always looking for a new or different driving experience.

Until 1925, horses outnumbered cars as the main form of personal transportation. And despite their advantages over horses, there were a lot of people in my grandparent’s generation who bemoaned the introduction of the gasoline horseless car.

So I understand that my lament for the emergence of autonomous transportation will not change the course of history as technology continues to take greater control over our lives. I take comfort in knowing that the transition from manually operated cars is unlikely to happen soon. So I won’t be deprived of my passion for driving as long as I am able to drive a car safely.

I regret, however, that my young grandchildren could never enjoy an aspect of my life that has been so rewarding to me. They’ll likely be much safer to drive in self-driving cars, but they’ll miss out on the visceral connection to the machine and sense of adventure, even when the commute is limited to the grocery store.

To console myself, I intend to give my grandchildren a taste of what they might be missing. As soon as they’re old enough to see over the dash and reach for the gas pedal (and maybe with permission from their mothers), I’ll teach them how to drive my 1965 Alfa Romeo. That way. , if self-driving cars are still allowed on the road in 25 years, they may be able to share the magic of driving with their own children.

At the very least, they can tell their kids stories about when their grandfather let them tame his mechanical beast.

Got a classic car with a story to share? It’s easy. Just go to this link, fill in the information and submit your story.