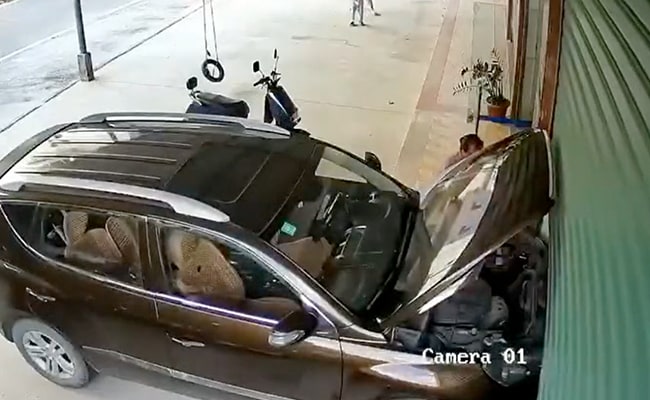 Several causes of the accident were cited in the comments left by Twitter users on the video.

A car is one of the most frequently used pieces of technology. From the combustion or electric engine, to power steering and braking systems, to computerized driver assistance programs, cars are packed with different types of technology. In recent years, automatic transmission cars have also gained popularity among commuters who find them very easy to drive in bumper-to-bumper traffic in megacities like Delhi. These cars also provide driving comfort in general, without the driver having to press the clutch pedal and gear lever frequently. But automatic cars require a certain type of skill, especially at the repair shop. However, a mechanic learned this the hard way when he was run over by a car, believed to be an automatic variant.

The mechanic is seen opening the hood of the car from inside the driver’s cab and returning to inspect it. After a few seconds the man makes some adjustments in the engine bay and that’s when the car suddenly accelerates and slams into a steel door with the mechanic wedged in between.

The footage reveals that due to this accident, the guy was seriously injured and completely stuck in the steel structure.

The video was posted on Twitter by an account named @ragiing_bull. The video was captioned as follows: “If an automatic vehicle breaks down, never stand in front of the vehicle. Please notify your friends and family. Share this message as an example.”

#WARNING
If an automatic vehicle breaks down, never stand in front of the vehicle.
Please notify your friends and relatives.
Share this post as an example. pic.twitter.com/P2OPQDXgvg

The video has over 187,000 views and around 4,300 likes. The video amazed and worried viewers, who left several comments.

Several causes of the accident were cited in the comments left by Twitter users on the video, as well as precautions the person should have taken.

Some users have suggested to always apply the handbrake.

According to one user, the vehicle has a manual transmission and he prefers automated vehicles because of the safety features: “This car is not an AT but an MT. Many people put their MT car in 1st gear without apply the handbrake when they park it.He forgot the car is in gear while trying to start the car.All modern AT cars have many safety features to prevent such incidents.

However, this video clearly conveys a message: Handling automobiles and other devices should be done with extreme caution.